Get the inside scoop on a creative legacy unlike any other! 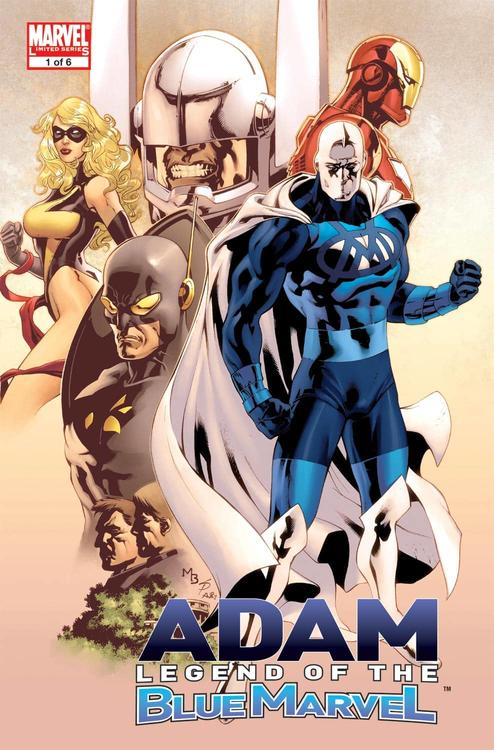 Take a guided tour of Marvel's mightiest creators with Marvel Tales! Ben Morse, currently a visiting lecturer at UNLV, previously spent a decade working within the House of Ideas. In each installment of this series, he utilizes that insider knowledge—plus his lifelong fandom—to connect with comics professionals as they spin stories about the Marvel Universe and its inhabitants!

Kevin Grevioux stands out in any crowd. A towering and statuesque giant with a booming voice that has brought life to numerous animated Super Villains including Terrax and Super-Skull, the 57-year-old Chicago native also appeared in live action films like Congo and Tim Burton’s Planet of the Apes. However, Grevioux always dreamed of creating his own stories, a dream he achieved on a huge scale as a writer and co-creator of the Underworld franchise—he also appears on screen as the werewolf Raze, naturally—and eventually carried over to the comic book realm.

Grevioux lists his childhood hobbies as everything from collecting bugs to playing football, but he also had a particular affinity for reading, focused on science fiction and horror. Around age 12, the youth discovered comics, and there would be no turning back from what he calls "a life-long passion."

"The Fantastic Four and Hulk were my absolute go-to favorites, followed by the Avengers and Thor," Kevin lists, describing the Marvel characters he gravitated to during his teenage years after forming an attachment to early animated interpretations prior. “I mean, when you talk about the first 100 issues of each of those titles, I think they're unparalleled in terms of comic creativity.

"As far as my favorite creators were concerned, the first ones I recognized were Stan Lee and Jack Kirby because as a team they created most of Marvel’s foundational characters. Afterwards it was guys like Roy Thomas [and] Marv Wolfman who I admired as writers, and John Buscema, Gene Colan, George Perez, Jim Starlin, and John Byrne who were my favorite artists.”

Since the late-'80s, Grevioux had attempted to break in to Marvel as a writer with no payoff. Pursuing this dream parallel to his goals in Hollywood proved difficult, so he focused on the latter and ended up achieving cinematic success. However, comics never submerged completely, and after Underworld hit big, the writer turned publisher, working on independent comics and launching his own small studio, Darkstorm Comics. This put him on the radar at the House of Ideas, who reached out about launching a NEW WARRIORS reboot spinning out of the CIVIL WAR event. Kevin calls the 20-issue initial outing “a great experience that allowed me to become acclimated to the profession and how comics are done at the top level." "I think the main difference, at least for me, is that writing comics allows for more creative freedom,” he tells of his transition from the silver screen to Super Heroes. "You don't have to limit yourself. There’s no budget when it comes to genre, so whether you’re doing a sprawling galaxy-spanning cosmic epic or a gritty film noir crime thriller set on Earth, it takes no more effort or money."

Entrenched at Marvel following his initial assignments, Grevioux knew the time had come to unleash an idea he’d held since his teenage years. “As a kid there weren’t many characters that looked like me, meaning black Super Heroes,” he explains. “And, even as a kid, there were certain things about the ones that did that kind of bothered me. They were pretty stereotypical. [Many] of Marvel’s black Super Heroes were based on previously existing white characters. With the exception of Storm and Monica Rambeau, [they] weren’t very powerful. I was always drawn to the more powerful characters whose abilities left you in awe.

"And none of the popular mainstream black Super Heroes were actually created by black writers. Not that there’s anything wrong with that. That didn’t diminish their popularity or worth as characters. But, I did feel that after almost 60 years of existence, it was time for that to change, and give me character life on a large established comic book stage."

Enter Adam Brashear, alias the Blue Marvel. Conceived by Grevioux as a 13-year-old, this character could conceivably “stand toe-to-toe with the best and most powerful Super Heroes ever created.” The writer would also gift his creation an aptitude for science and football from his own experiences. “With Adam, I was saying it doesn’t matter what people think of you, you can tear it up in the classroom and on the football field and have a strong moral core as well.” Finally, Blue Marvel wore a “full-bodied uniform so he could operate more freely as a hero and not be saddled with racial controversy,” a concept that came straight from kid Kevin and his friends.

The 2008-2009 five issue limited series ADAM: LEGEND OF THE BLUE MARVEL, written by Grevioux with art by Mat Broome, established Brashear as a prominent hero of the 1960s who received no less an honor than the Presidential Medal of Freedom from President John F. Kennedy. On the same day he bestowed this honor, JFK urged Blue Marvel to enter an early retirement, rather than stoke racial tensions after a battle damaged his uniform and revealed him as a black man. The balance of the project explored Brashear’s re-emergence at the behest of Marvel’s modern heroes to aid against his returned archenemy, Anti-Man.

“The Sentry had come out a few years before about a forgotten hero so an aspect of what I wanted to do was no longer novel,” the writer recounts. “So, I had to have Adam come out of retirement in order to deal with a Super Villain even the Avengers couldn’t handle.

"I wanted the process that gave him his power to retard his aging, so that even though he was in his 90s, he still looked like he was in his early 30s. The compromise was he would appear to be about 40 or 45 with graying temples like Reed Richards—it all worked out."

As to highlights of from LEGEND OF THE BLUE MARVEL, Grevioux cites the conversation where Adam learns his wife had been sent to spy on him as well as a battle with the Avengers and knocking the Sentry into orbit, which he describes as “the stuff of comics." He also praises Broome’s art, hailing his work as “phenomenal."

That initial story would earn Adam a recurring place, featuring in events such as FEAR ITSELF. In 2013, writer Al Ewing would add Adam to the cast of MIGHTY AVENGERS and continue utilizing the character through his 2015 run on ULTIMATES. Blue Marvel has become a staple of the Marvel Universe, one of its most powerful and principled champions.

"I just want him to be a good classic heroic role model for the cause of justice,” Grevioux states on the lasting legacy of his work on the Blue Marvel. "And that his heroism is about serving the people, and not his own selfish needs."